Kamran Pashais a writer and producer for NBC's highly anticipated new television seriesKings, which is a modern day retelling of the Biblical tale of King David. Previously he served as a writer on NBC's remake ofBionic Woman, and on Showtime Network's Golden Globe nominated seriesSleeper Cell, about a Muslim FBI agent who infiltrates a terrorist group.

View a video of Kamran discussing
Mother of the Believers

Sign up to receive email updates from Kamran Pasha!

Shadow of the Swords
An Epic Novel of the Crusades 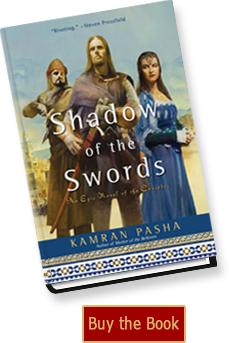 An epic saga of love and war, Shadow of the Swords tells the story of the Crusades—from the Muslim perspective.

Saladin, a Muslim sultan, finds himself pitted against King Richard the Lionheart as Islam and Christianity clash against each other, launching a conflict that still echoes today. Read more

"This is a suspenseful, action-packed historical [novel]. . . Best, however, is Pasha's clear depictions of Saladin's and Richard's astute political and military leadership styles as they rally their forces to fight yet another religious war neither would win."
-- Publishers Weekly

"Forget everything you think you know about the Crusades. In this gorgeously wrought tale, Kamran Pasha depicts the other side of the legendary struggle with startling modern relevance. His unexpected vision of charismatic Saladin, tortured Richard the Lionheart, and the proud woman who comes between them is passionate, gilded with detail, and steeped in the blood and thunder of two antagonistic faiths, vying for possession of a beleaguered land. A triumph from start to finish!"
-- C.W. Gortner, author of The Last Queen and The Confessions of Catherine de Medici

"A ripping, action-crammed yarn, Shadow of the Swords puts us smack into the Crusades, making this period new and visceral and riveting. Kamran Pasha is a powerful new voice in historical fiction."
-- Steven Pressfield, bestselling author of Gates of Fire